Over the centuries, the nations of Europe have gone to war over religion, land, political influence, and countless other points of contention. In the nineteenth century, however, we see European wars being fought not so much to overpower foreign enemies but to further a nation’s internal agenda, using war as a kind of political activism.

The aim of war was often to encourage nationalism, and politicians regarded death and destruction a price worth paying to achieve a spirited national unity. In some instances, however, this drive for national pride yielded horrific results and left nations vulnerable and unstable. The trick was to find an acceptable level of death and destruction while gaining the socio-political advantages of going to war.

German Chancellor Otto von Bismarck and Russian Tsar Nicholas Romanov II both played this dangerous game.  Bismarck successfully led the nation-states of Germany into wars that furthered his agenda of uniting Germany, while Nicholas watched his regime collapse as the Russian army fell to the Japanese.

What led to such drastically different results?  On the 150th and 110th anniversaries of these two campaigns, it’s interesting to analyze the social and political factors that produced such varied outcomes and observe the reverberating effects that these conflicts have had on modern warfare. 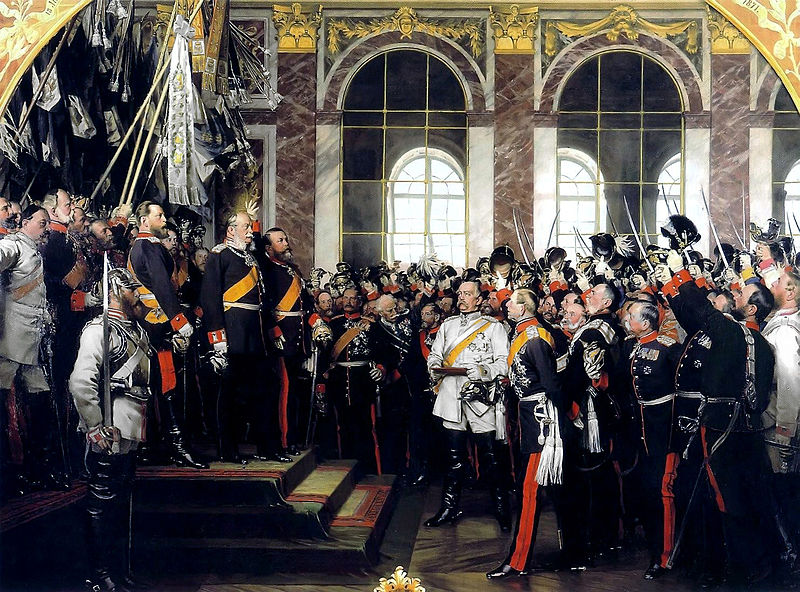 The Proclamation of Wilhelm as Kaiser of the new German Reich, in the Hall of Mirrors at Versailles on 18th January 1871, painted 1885 / imageuest / Bridgeman Art Library / Universal Images Group

During the last half of the 19th century, no politician manipulated warfare to aid his internal agenda more successfully than Bismarck.  When Bismarck entered the political arena in the 1860s, Germany was a divided array of nation-states lacking central leadership or organized politics.  Bismarck saw an opportunity for a powerful German nation of unified states under a central government, but tensions among political parties throughout the German states made this nearly impossible to achieve internally.   In 1862, Bismarck, then Prussian prime minister, turned the eye of the German people towards the small Danish provinces of Schleswig and Holstein, which were populated by many native Germans.  Bismarck declared war on Denmark, putatively to protect the political freedoms of the Holstein region from Danish influence, though he kept a shrewd eye on the long-term political progress that the move could incur.

It worked. Bismarck’s call to arms not only united the German states but also strengthened the political bond with Austria, a powerful neighbor. Hostilities broke out in early 1864, and after only eight months of fighting the Danish suffered major casualties at the hands of the far more powerful German and Austrian forces and were forced to sign the Treaty of Vienna, surrendering nearly all of Schleswig and Holstein.

The success of this relatively small war was not lost on Bismarck. It instilled a sense of patriotism in the citizens and demonstrated Germany’s military might.  Buoyed by this triumph, Bismarck manufactured two more similar wars.  He first turned the animosity of the German people towards their recent ally, Austria, using the excuse of a small dispute over the ruling of the newly acquired Schleswig and Holstein provinces.  This short war of 1866 produced an overwhelming German victory and helped achieve Bismarck’s goal of uniting Prussia and its surrounding states into the North German confederation, which was segregated from any unwanted Austrian influence.  Bismarck went on to a third decisive victory, this time against the French, resulting in the unification of Prussia and most other German states.  Bismarck would have a lasting effect on Germany, leading to the nation’s bold military aggression in the First World War.  Bismarck’s public agenda of instilling a universal empathy among all German speakers would be later warped by German Chancellor Adolf Hitler as a justification for his tyrannical conquests in the 1930s.
The German wars of Unification showed the usefulness of warfare for political progress. By capitalizing on the growing patriotic fervor and the desire of the German people to protect their fellow German speakers, Bismarck was able to execute his military operations with general public support.  Each of these brief but impassioned wars encouraged a growing nationalist sentiment that led eventually to unification.

In contrast, according to scholar Chris Trueman, Tsar Nicholas Romanov attempted to manufacture a war to create a sense of patriotism in his restless nation.  When Nicholas came to power, the Romanov family had ruled over Russia for three and a half centuries, and critical flaws in the Russian political system had been revealed.  The Russian people felt repressed by the traditionally strict regulations set by the Romanov leaders, and a lack of food brought a new sense of discontent towards the Tsar.  Nicholas hoped that a military success would engender nationalist sentiment, and he turned his attention to remote Japan. Tensions had existed over control of the crucial Russian trade post Port Arthur on the Korean peninsula, and in 1904 these tensions erupted into the Russo-Japanese war.  Shockingly, the far superior size of the Russian army yielded no apparent military advantage as Japanese forces continually drove back the foreign militants, and by 1905 the crippled Russian army was forced to retreat from the Korean peninsula nursing a wounded honor and thousands of wartime casualties.  Anti-Tsar sentiment increased, as did the decay of Nicholas’s authority over his vast nation.  Roughly a decade later in World War I, once again in the midst of Russia’s military failures, the deflated Russian populous finally overthrew Nicholas.

Why did this military operation fail so dramatically while Bismarck’s were so successful?  A key difference lay in the simple geography of the combat.  In declaring war on Denmark, Austria and eventually France, Bismarck aroused an animosity of the German people towards their closest neighbors. According to historian James Graham, the citizens of Prussia and all other German states had experienced the past political tensions with these neighboring nations, and Bismarck was able to fan the flames of these tensions.  Additionally, Bismarck argued that his forces would be fighting to protect fellow German speakers, with whom they could identify.

In contrast, Trueman points out, Japan was a distant, shrouded island to most Russians. The task of mobilizing the Russian armed forces across such a vast expanse simply to reach the battlefields proved thoroughly dispiriting.  Additionally, a lack of knowledge of Japanese society and of the true Russian military objectives sealed fate of the Russian army as they fell at the hands of the Japanese forces.

These two wars, fought not for the purpose of extending political influence, but rather to improve the internal influence of their respective leaders, displayed several key factors about modern European warfare.  Even in the midst of such new powerful military technologies as the industrial revolution had brought, the emotional mindset of the soldiers still proved a critical factor in the success or failure of each war.  The German wars of Unification and Russo-Japanese war illustrated an important element of nationalism: citizens will fight to extend their national pride, as in the German states, but citizens lacking any initial sense of patriotism will be hard-pressed to increase their national pride when thrown into the horrors of modern war.  These two military confrontations certainly displayed the true equation of success for manipulating warfare to aid an internal agenda; although the conquests of Bismarck and failures of Nicholas each played out on a relatively small scale, these wars of nationalism laid a strategic blueprint for many of the wars that would follow.