In the early 2000s, following the international success of Japanese anime and manga (Pokemon, Dragonball), video games (Legend of Zelda, Super Mario), and film (Spirited Away, Ringu), the Japanese government realized that, despite the economic setbacks of the time, the country’s cultural influence had expanded greatly. Thus, the creation of “Cool Japan,” an expression of its emergent status as a cultural superpower, and for the next dozen years, the Japanese government boosted cultural exports from these creative industries, including one of its oldest and most influential anime genres: mecha.

The origins of Japanese mecha (an abbreviation of mechanical) can be traced to the end of World War II and the dropping of the atomic bomb. During Japan’s Occupation and post-Occupation years (1945-early 60s), an explosion of artistic creativity occurred in the manga industry, possibly aided by the medium’s exclusion from U.S. Occupation censorship policies. One artist, Mitsuteru Yokoyama, took advantage of this loophole to craft one of the most influential mangas of all time.

Yokoyama had been motivated to become a cartoonist after reading Osamu Tezuka’s Mighty Atom (Astro Boy, 1952), the story of an android who fights crime with mechanical powers yet was capable of displaying human emotions, essentially acting as an interface between man and machine.

Yokoyama took a different approach, drawing heavily from his childhood encounters with war, technology and film. The result was Tetsujin 28-go (Iron Man No. 28, 1956), a parable about technology’s dangers and benefits. It tells the story of Shotaro Kaneda, a boy detective who fights criminals by operating his robot by remote control. Their adventures were depicted in fast-paced, action-filled panels.

Tetsujin 28-go: the series that begot the Japanese mecha genre.

Much of Tetsujin 28-go’s appeal comes from the strong bond between boy and robot, enhanced by the robot’s benign and knight-like design, which suggests it is an avatar of unstoppable justice. Tetsujin 28-go was the first instance of a Japanese cartoon based on the idea of a giant humanoid robot controlled by a human being, with the former acting as a tool for the latter to realize his fullest potential. This was, perhaps,  a metaphor for a resurgent Japan, reawakening like a giant from the rubble of WWII.

If Yokoyama established a link between man and machine with Tetsujin 28-go, then Go Nagai forged that link into a union. One day, while waiting to cross a street, Nagai contemplated the backed-up traffic and mused about how the drivers were wishing for some way to get past the other cars. This inspired a novel idea: what if the car suddenly transformed into a robot that a person could ride and control like a regular vehicle? Nagai’s concept — a pilot sharing the body of a robot — made the man-machine bond both figurative and literal. The resulting manga, Mazinger Z (Tranzor Z, 1972) would prove to be the next big evolution in the mecha genre. 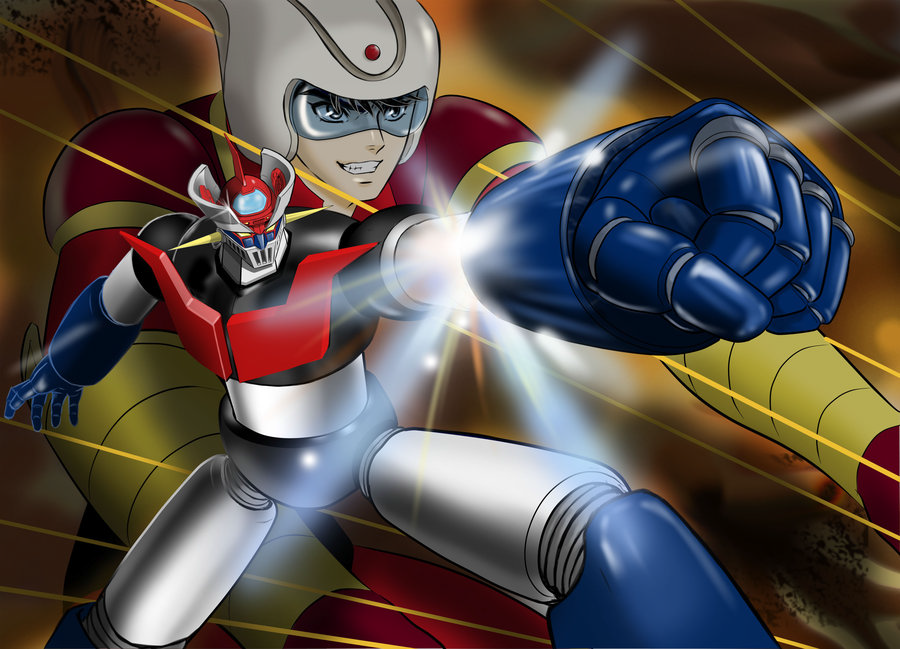 Mazinger Z: man and machine as one dynamic entity.

Mazinger Z is abouti Kabuto, an orphan who stumbles upon a giant robot in his grandfather’s secret lab. The robot’s name evokes the image of a majin (demon god) with its similar-sounding syllables (‘Ma’ meaning ‘demon’ and ‘Jin’ meaning ‘god’), suggesting  it is both a machine built by humans for protection as well as an ancient, unfathomable being.

Mazinger’s appearance was striking for its time: a brightly colored mechanical juggernaut ornamented with a mixture of military equipment and samurai armor. Its design resembled the sleek new roadways, bullet trains and skyscrapers being built in Japan during the 1970s. A small hovercraft docked on the robot’s head housed Koji, who acted as its ‘brain’. This established Mazinger as an extension of the pilot’s abilities and will, symbolizing a powerful symbiosis between man and machine.

Splintering of the genre

Before this busy decade ended, Nagai’s work was surpassed by yet another development in the genre. Created by Yoshiyuki Tomino, Mobile Suit Gundam represented a shift in both tone and scope. In place of isolated weekly episodes, Gundam presented a continuously developing story with a more ambiguous sense of morality and the effects of war on the people who fought. Instead of humans using machines to fight off evil aliens, Gundam had humans fighting humans, with both sides having their own ideological motivations. This new approach led to the splintering of the mecha genre into two subgenres: Super Robot and Real Robot.

Whereas Super Robot stories focus on near-godlike mechs in fantastical scenarios, the Real Robot emphasizes drama, human characterization, a realistic civil-war-in-space backdrop, and plausible mech creations that required adjustments and repairs. This could lead to moments when the protagonist might actually lose a battle if the machine was not properly operated and maintained. This is in sharp contrast to Super Robot works, which depict mechs as near-invincible entities that only seem to sustain damage when needed to drive the plot.

Unlike clunky, lumbering Western mechs, Japanese mechs were anthropomorphic and highly mobile entities. They espoused recognizable classes of people — snipers, soldiers, knights, etc. — including symbols of Japanese culture such as the samurai.

Motion was equally important. Like the samurai sword, the mobility of Japanese mechs was managed by the user within, whose own bodily control and prowess determined the mech’s amplified analogues of human action. This granted the mechs a striking agility as the humans inside the mechs became empowered. The Japanese mecha philosophy promotes the idea of having people work alongside humanoid machines, a desire associated with Japan’s long religious history and culture.

Much like the Western superhero genre, with characters like Superman inspired by Judeo-Christian ideals of an anthropomorphized God, the Japanese mecha is influenced by East Asian religion. Both the Shinto concept of revering natural phenomena as kami (gods) and the worshipping of carved images of Buddha in Japan suggest the protean notion of inner energy that can cause a mechanical form to show human traits. This is the Japanese mech’s most distinctive characteristic: it is the tool through which its pilot expresses their power and will to overcome by bonding with the machine. This union imbues the mech with what might be called a soul.

Coming to the West

Shogo: Mobile Armor Division offers an example of a Western “first-person shooter” game that captures the thrilling essence of Japanese mecha works like Patlabor and Venus Wars, combining speedy mechs with the fast-paced gameplay of Doom. Released in 1998 by Monolith Productions, Shogo puts players in the shoes of Sanjuro Makabe, a wise-cracking commander in the United Corporate Authority, who is emotionally recovering from an accident that killed his brother Toshiro and childhood friends Kura and Baku.

From the outset, Shogo displays many of the characteristics of anime. On booting the game, the player is treated to an anime-style movie sequence, accompanied by a Japanese pop song whose lyrics embody typical anime themes of courage, perseverance and optimism.

The audiovisual design is equally noteworthy. The large, bright eyes of the characters, grandiose explosions and in-game mock advertisements are characteristic of the anime aesthetic, as are the cheesy one-liners, hand-wringing angst and cocky humor of the dialog. This is especially apparent in Sanjuro’s conversations with allies like Kura:
Kura: “Watch my ass!”
Sanjuro: “My pleasure.”
Kura: “You say the sweetest things!”

In addition to its audiovisual design, Shogo displays strong mecha anime influences in its narrative, which is appropriately chaotic, conspiratorial and convoluted. The plot contains many sudden twists and turns that leave Sanjuro questioning his alliances and objectives.

The tone of Shogo leans heavily towards Gundam and Real Robo. The UCA, CMC, and Fallen all have their own legitimate reasons to fight one another. The Fallen, in particular, become less antagonistic in the eyes of the player through a late-game revelation that unveils the Fallen’s raison d’etre: to front the interests of a superbeing known as Cothineal. This underground creature is the secret source of kato, and is trying to regain freedoms accidentally stolen from it by the colonizing conglomerates.

Further complications arise from Sanjuro’s commanding officer who gradually becomes irrational in his attempts to eliminate the Fallen. This places Sanjuro in a dilemma he must deal with near the end of the game when given the ability to choose one of two paths: either bring Gabriel to justice, or help him seek a truce with the UCA to put a peaceful end to the conflict.

All of these audiovisual and narrative elements serve to imbue Shogo with a distinct mecha anime ‘feel’ that balances drama and playfulness, a feat made all the more impressive by the game’s Western origin. But Shogo’s real appeal and biggest nod to the mecha genre lies in the four Mobile Combat Armor (MCA) suits that players can choose from and pilot throughout their adventure.

The MCAs in Shogo: Mobile Armor Division reflect the aforementioned Japanese philosophy of suggesting combat classes, such as the Akuma’s ‘scout’ look and the Predator’s ‘assault’ design, and display a mix of Real and Super Robot elements. On one hand, the MCAs reflect their industrial origin through the name of their manufacturing firm (e.g. Andra Biomechanics) and classification numbers (e.g. Mark VII). On the other hand, two of the MCAs bear Super Robot-style names that refer to malicious supernatural beings: Akuma means ‘evil spirit’ in Japanese, and Ordog is Hungarian for ‘devil’.

By transplanting one of Japanese pop culture’s most iconic media forms to the quintessentially Western first-person shooter genre, Shogo gives the player the opportunity to experience firsthand the chaotic action and drama typical of mecha anime, and live out their own power fantasies by ‘becoming’ the pilot/machine.

The genre of mecha, the blending of man and machine, shows no signs of slowing down. With Shogo the genre has made the leap from east to west. It will be intriguing to see what developments  await us in the narrative of the coupling of the human and the non-human.