What’s in the Art: A look at Picasso 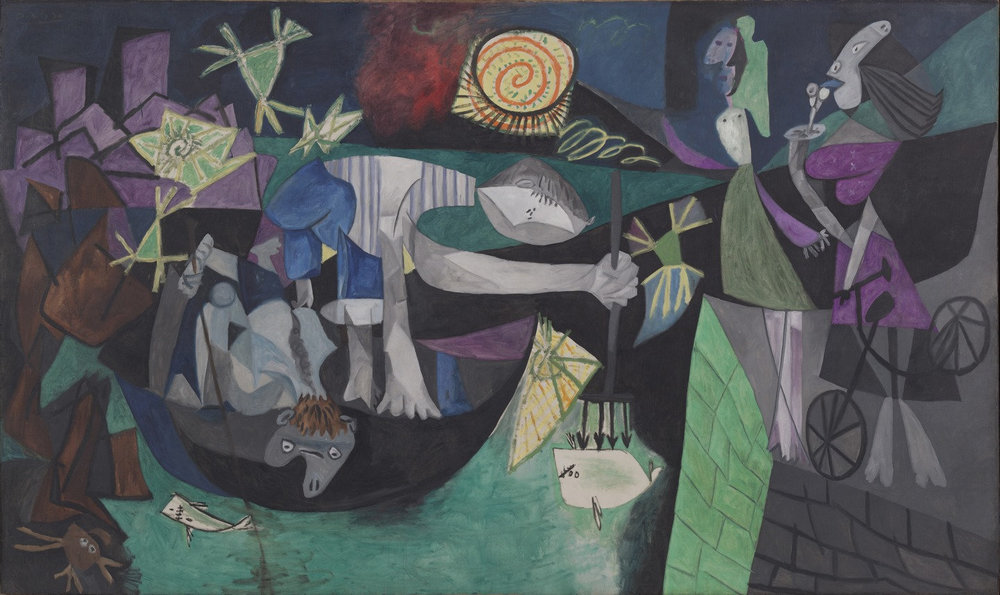 I used to see works by Pablo  Picasso as an incomprehensible jumble of shapes, swirls of colors, with  maybe a face somewhere in the picture. “Night Fishing at Antibes” changed my perception of the artist, because there’s way more to the jumble of shapes than I first thought.

The painting has elements from the cubist period and of course an emphasis on geometric figures, with aspects of surrealism and primitiveness in it as well. But it’s an unusual painting for a Picasso. It’s rare to find one of his paintings with both a landscape and figures in it, and the only other painting like it is Guernica. The swirl of colors, the figures meant to be seen, the sense of foreboding, the sense of death, make this painting resonate with me. It has a story to tell.

In the center of the painting the fisherman has a fishing line tied to his foot, looking for fish. Another fisherman holds a spear in his hand, a hand that is the most realistically drawn part of the picture. He is poised, captured just before he drives the spear into a fish. Above them is the moon, and to the right of the fisherman are two lights to help them find fish. The fishermen seem to be fused together, with one head strong and actively pursuing the fish, while the other seems anxious and passive, waiting with a fishing line at his foot, a fish just about passing him. The two different fishermen could be a representation of how Picasso felt about himself, or was meant to resonate with the viewer.

Two women stand on the shore. The one licking an ice cream cone and with the bicycle is presumably Picasso’s mistress, with her phallic head and enhanced body features that bear resemblance to his lover of the time. Next to her is a woman with her arms outstretched, seemingly calling to the fisherman. This would be Picasso’s wife, Olga, because of the figures likeness of the real life Olga. In the left corner of the painting is a purple mass with two towers, the Chateau Grimaldi in Antibes, France.

This painting was completed in August of 1939, with World War 2 just on the horizon. Picasso was in Antibes at the time and Europe was filled with uncertainty and fear. This painting also came two years after the Spanish Civil war, and the depiction of Guernica. But this is a different kind of war painting. The spear has not yet plunged into the fish, and although the spear is on the brink of the final blow, there’s still a small amount of hope that the fish will be pardoned. The women stand on an an unsteady jetty, the moon seems to be hurtling toward the beach, and the city of Antibes resembles ruins. There is no blood, guts or horror. Picasso doesn’t need to show the viewer a soldier; the quiet uneasiness hints of a world at the brink of chaos.

But the spear hasn’t claimed the life of the fish. The hand gripping the spear is strong and certain in its task. This captured moment of hesitation perhaps reflects the tension the world was feeling as events in Nazi Germany unfold.

Of course, the personal significance  of this painting is for  the painter is his alone to know. But the feelings of tension and uncertainty are relevant, no matter the time period. This painting speaks to me because there’s more too it than just night fishing. For me, this piece in particular, unique to Picasso’s style, speaks volumes about the world at such an uncertain time in human history. In today’s news and in individual lives there always lies aspects of uncertainty, of apprehension, and a fear of what is to come. But amidst the colors and the figures and the landscape, there is the hand gripping the spear that threatens death but . A hand that is real and familiar. A hand that holds creates two radically different possibilities for death or a small sliver of hope.

This is not just “a Picasso.” This is a testament to our own lives, and what lays ahead.