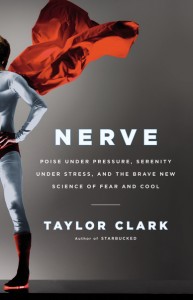 Lying on his back inside a cramped capsule on top of a missile with the destructive power of 3.5 million tons of TNT, Alan Shepard was growing impatient. Scheduled to launch on the Freedom 7 mission in 1961, he was set to become only the second American to go into space. But there was an issue: one of the flight techs didn’t like the pressure of the fuel lines and stopped the countdown. Strapped on top of 37,405 pounds of explosives, he uttered the immortal line, “Why don’t you fix your little problem and light this candle.”

It was something out of Hollywood: a cool, snappy one-liner filled with bluster, but in Shepard’s case, it wasn’t hot air.

As the thousands of pounds of propellant ignited below him, buffeted by massive forces as the missile freed itself from earthly confines, his heart rate remained as low as it would have been if he was bored and making small talk at a cocktail party.

Taylor Clark wonders how he was so calm. Under massive and unimaginable physical stresses, the man was cooler than a liquid nitrogen cucumber. Surely there was something to his unflappable demeanor that set him apart, because in addition to intensive training and military experience. Shepard definitely had The Right Stuff. Clark explores fear, poise, and performance under pressure in Nerve, a literary tour of “serenity under stress and the brave new science of fear and cool.”

Clark draws on stories of unflappability from all over, from such diverse sources as a nuclear submarine officer who saved the world during the Cuban missile crisis, an emergency room surgeon at a major trauma center, and Laurence Olivier’s stage fright.

The author admits early on that he himself is a basket stew of neuroses, and that he endured a bit of good-natured ribbing when his friends and colleagues found out that he was writing a book about fear and cool, but that just makes the journey more interesting. Instead of an exercise in academic storytelling, Clark uses lessons from the different arenas he explores to build a picture of grace under stress, what it is, what it involves, and how to get it.

The most important thing that emerges is that if you don’t think about what can go wrong, or about what you shouldn’t do (“don’t lose track of the ball, don’t fumble the catch, don’t trip”), and instead focus on what you can do and what you have direct control over (“keep your eye on the ball, keep your hands steady, take it one step at a time”), it becomes possible to harness the power of fear productively.

It’s a bit of a confusing dichotomy, though. Aren’t fear and courage opposites? Maybe in theory, but the physical symptoms are the same. It’s no coincidence that the instinctive biological response to stress has been dubbed the “fight or flight response” ( or being the operative word). In a strict sense, nerve has connotations of both fear (bundle of nerves) and courage (to get up the nerve), and the title is aptly named with this in mind.

Nerve is a funny, entertaining, illuminating, and ultimately hopeful ride. Through stories of stress and the science of strength, Clark shows us that if we approach it in the right way, there really is nothing to fear from fear itself.

Warren Singh is a bookworm and wiseacre who sometimes goes undercover as a writer. He also occasionally pretends to be studying chemical engineering at Worcester Polytechnic Institute, Worcester, Mass. Sinecures, paeans, and disproportionately massive bribes may be proffered at probablystillsomewhatincorrect.wordpress.com