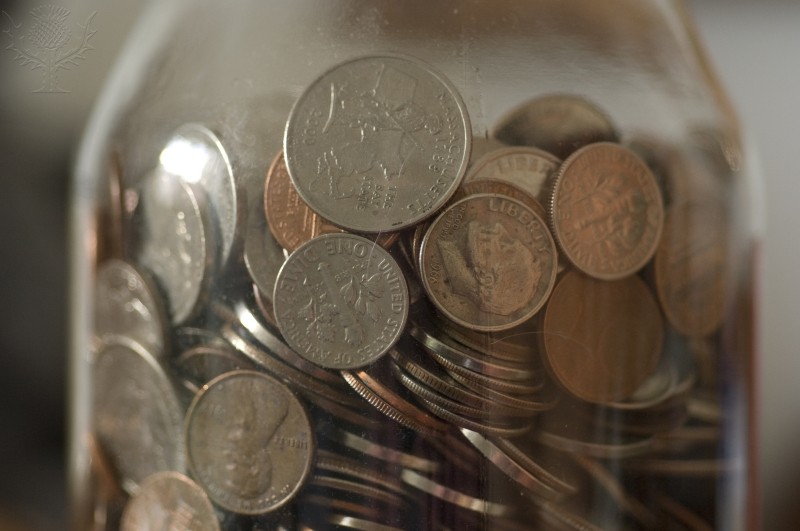 “Huh? What?” He was slightly hard of hearing, mind you.

“Yeah. Well, take a look through ‘em and take what you want.”

There would be a pile—of varying sizes each visit—that contained random coins. Most were simple denominations: pennies, nickels, dimes, and quarters. Occasionally, I would find something more intriguing or valuable, like a half-dollar, or a foreign or antique piece, which was always a thrill.

Grampa Ted would tell me not to take the whole pile because I should “save some for the other grandkids” as well. (My cousins and I were in the midst of teenagehood and therefore had to be imbued with the art of sharing.) He would ask me what the coins were, as if he hadn’t seen them before, even if the coin in question was a humble penny. I would oblige, of course, and tell him what it was if I knew. And because I visited so often, I would get the most from the piles. Not only that, I would get to cherry-pick the best of the bunch. I was a self-made coin collector because of Ted, though for him, the name of the game was learn quick or get called an asshole.

The ordinary ones coins I rolled in coin-wrappers and deposited at the local bank. The extraordinary ones, which were older (thus deemed “rarer”) than their lackluster counterparts, I kept. I also held onto the special coins that were unique in origin or age.

There was kind of a fourth category: the “what the heck is that?” category. Anything that wasn’t a coin went here, and no, there was absolutely nothing valuable in these piles. Bus tokens, car fuses, and tiny chunks of metal were common.

“Huh? Goddammit, do you want it or not?”

I can remember one occasion when I was presented with a green, gallon-sized glass whiskey jug full of pennies. Frankly, the sentimental value it had to my grandfather, I was told, did not outweigh—although it seemed that the jar outweighed a neutron star—the fact that the container of pennies was just plain cumbersome. This jar contained nothing more than post-1980 pennies. They literally weren’t even worth their weight in copper since the government began using zinc and other fillers instead. And they really weren’t worth being put into coin rolls. After I had rolled them, I realized that I had earned fifteen bucks, which was like working for two hours at a minimum-wage job. It took an hour and a half to just sort them and roll them. I never told Gampa Ted that I deposited them. I can imagine his reaction.

Other occasions were more “profitable,” a word I didn’t like to use because it made it sound as though I only visited Grampa Ted for the coins. That was true for a while, I suppose. There were many visits where he would give me extremely special coins. Sometimes he’d give me pure silver. I would often get half-dollars, and I liked to hold onto the ones from before 1970.

One time, he gave me a coin from 1827, which I later had appraised. Turns out it was worth about $200. He was excited to hear that but disgruntled that someone would spend that much money on a coin.

One day he handed my dad a scrap of newspaper to bring home to me.

“Grampa thinks you should go to this,” my dad told me.

It was a newspaper clipping for a coin show in some town nearby. It mentioned sales, appraisals, and trading, as well as the opportunity to rent spaces.

My dad continued, “He also sent you this.”

He handed me a twenty-dollar bill.

“Well, we’ll make a plan—maybe some weekend—to check it out. It’s about a forty minute drive from here.”

It wasn’t more than a couple weekends and we were off to the show. I was really looking forward to it. Grampa Ted had never been to one of these, but he seemed to have an intuitive sense that I would enjoy it. I still could not get over the feeling of the twenty-dollar bill in my hands. I wanted to keep it forever, but he would certainly not have approved of that. If he was going to give me a small fortune, he would at least expect me to use it as he had intended.

When the day arrived, we drove off not knowing what to expect. The hotel where the show was being held had numerous signs advertising the event, so I figured it must have been popular. One of the signs read “Monthly Rare Coin Show.” Upon entering the building, we walked past some dealers who sold coin essentials such as coin-rolls and sleeves, as well as guidebooks on coin values and those pre-assembled collection kits like the 50 State Quarters Collection people bought for their kids all those years ago.

The admission was usually one dollar—because that would keep those who weren’t all that serious about coins from taking up room on the floor—but with our newspaper clipping from Grampa Ted we got in for free. He would have been so proud. We also got to enter a raffle for “a randomly selected coin valued between ten and twenty dollars.” While we were standing there, I signed up for the mailing list, so that I would always know when the next coin show would be rolling in.

We stepped onto the floor, felt the musty air of mildewed coin wrappers, and quickly realized our rookie status. Everyone looked the same, they all looked like Ted. Why wasn’t he here? Oh right, the only thing he hated more than hordes of humans confined to small spaces was the act of spending money.

“Um, where are the people other than the old white guys?” I asked.

There were more than sixty tables, and each had its own stacks of coins, paper money, rare metals, stamps, and similar items. Old white men held out magnifying glasses to inspect their purchases. Elderly customers bought from elderly dealers, who yelled across the coin cases about the price of silver bullion being particular high that day.

I had no idea what I was doing, but I didn’t care.

Approaching one table, I talked to a dealer—in a very suave tone, might I add—about my h
ope to pursue mercury dimes.

“The 1916-D I have here is worth more since it is above XF grading,” the first of the old, white dealers said.

Walking table to table, I managed to buy many one-dollar items, such as a 1943 German 1 Reichspfennig coin which attracted me with its moss-green color (though when I arrived home and turned it over, I realized it had a Swastika on it…oops). On a lighter note, I found beat-to-death buffalo nickels that some guy was selling for fifty cents apiece. I was unsure what year they were, but I didn’t even care! Then I thought I hit the jackpot with a 50 Franc Moroccan coin dated from 1371. “Old things are always worth more,” I thought. I learned after my purchase from another dealer that the date was relative to the calendar of Islam. So 1371 really meant something like 1951. Lame.

With a pile of coins in hand, my dad and I left more enriched than when we walked in. From many of the dealers, we had learned about the rating systems of coins. We learned which ones were the best to start a collection. We were taught how to keep our coins in the best condition for resale. I even kept the silver dollar I received as change at one of the dealer-stands.

No, neither of us was an expert at coin collecting. But Grampa  Ted wasn’t an expert at this either, so I didn’t have to worry about impressing him. I couldn’t wait to tell him about these people spending all that money on little chunks of metal! On second thought, I had better spare that detail. Old or new, he didn’t believe that anything was worth more, especially a coin sold by some anonymous dealer. All I know is that the older our relationship got, the more it was worth to me.

Nick Porcella  is a recent graduate of Clark University, Worcester, Mass., where he studied English and philosophy. He is now a part of the Master of Arts in Teaching program at the same institution. See more of his literary work at Entropy Literary.

One thought on “Old Things Are Always Worth More”